Ganbina is an Indigenous led organisation based in Shepparton, Victoria. Social Ventures Australia supported Ganbina through the SVA venture philanthropy program until 2016 and has recently conducted an SROI report evaluating the social impact created over the last four years compared to the investment.

This year, we have been confronted with the truth of inequity that pervades our society due to racism both globally and within Australia.

We know the prevalence of Aboriginal and Torres Strait Islander youth in prison is a significant problem in Australia. We also know that we are still far from closing the gap in health and educational outcomes between Indigenous and non-Indigenous Australians. We also have a long way to go to appropriately recognise the voice of First Australians in our country’s governance.

One organisation that is working to address the gap is Ganbina, a school-to-work transition program for Aboriginal and Torres Strait Islander youth. Based in the Goulburn Valley in Northern Victoria, Ganbina was established in 1997 to empower youngsters from 6-25 years old to reach their full potential through meaningful engagement in education, training and employment programs. Ganbina is an example of an organisation that is contributing to tangible and long-term change.

This year, my colleagues and I assisted Ganbina with a social return on investment (SROI) analysis. It was the latest report in a series of evaluation and impact reports commissioned by Ganbina over the last decade. Ganbina has a strong practice of evaluating its impact which is driven from the top. Accountability to the young people, their families and to Ganbina’s philanthropic partners is a key tenet of Ganbina’s ethos and practice.

The latest SROI report focuses on the social impact created over the last four financial years compared to the investment in the program over that time. We found Ganbina helped 579 young people during the four-year period and created approximately $60,000 of social value per young person. For every $1 invested in Ganbina during this period, $6.60 of social and economic value was created. The majority of the value (80%) was created for the young people. We found Ganbina expanded the view young people had for their future, helped them understand their cultural background and improved their school attendance and engagement.

“Ganbina showed me how to look forward to the future and that’s something I never thought of as a kid. They helped me believe in a better tomorrow.” – Young person involved with Ganbina

Fourteen per cent of the value was created for parents or guardians the majority of which was in the form of an improved relationship with the young person and reduced stress. Value was also created for employers, government, and schools. 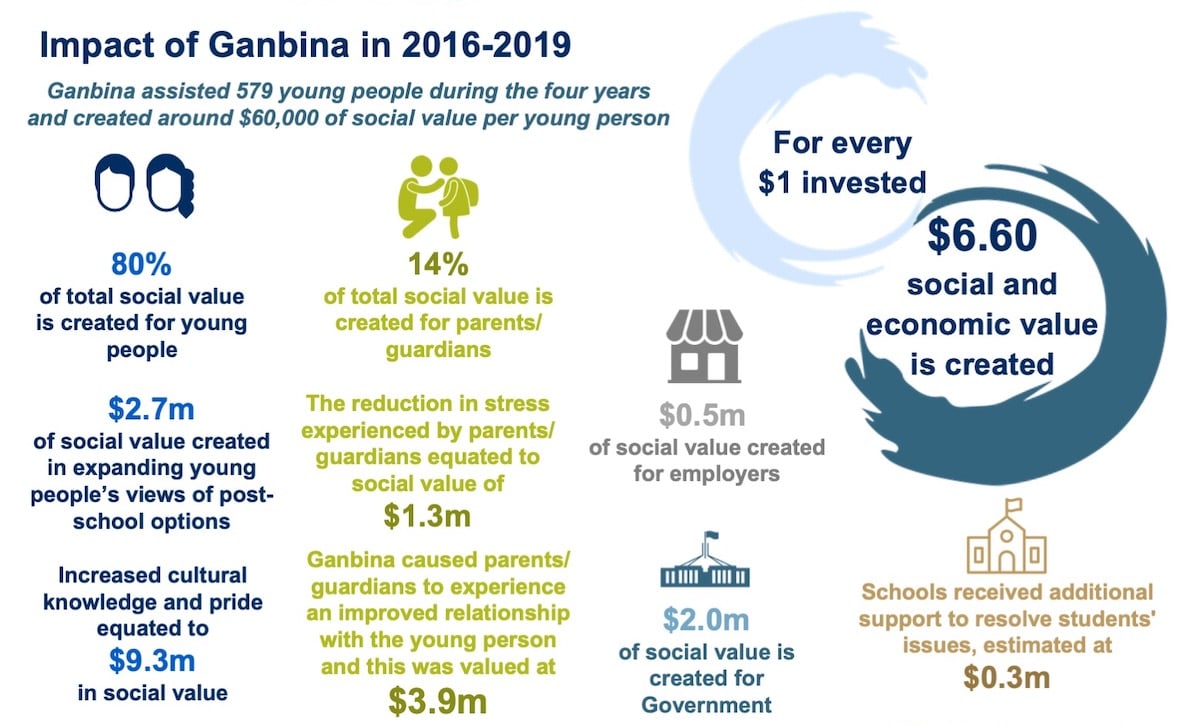 Ganbina’s vision is ‘to see, within two generations, Aboriginal and Torres Strait Islander peoples have cultural, economic, and social equality and become empowered to live, love, learn and leave a legacy’. Part of Ganbina’s success is the potential for long term (20 years) involvement with young people. This is an innovative approach that emphasises real change requires a long-term view.

Ganbina starts working with children in schools from the age of six and continues through to 25 years of age. It offers a program suite that caters for each stage of their life from tutoring for school to assistance in gaining work experience and professional skills, from gaining a drivers licence to applying for further education and scholarships.

“My children have achieved an enormous amount with Ganbina, one completing year 12 and in her second year of university and the other continuing schooling instead of dropping out.” ­ – Parent/guardian

Eighty per cent of the total social value created was for young people. Ganbina provides information and opportunities at an early age so that young people begin to dream big. The staff then work with all relevant stakeholders including schools, families, and potential employers to improve education outcomes and gain meaningful employment in-line with the young person’s aspirations. Unlike other school-to-work transition programs, Ganbina emphasises matching the young person with the jobs that align with their career goals and interests.

“A couple of the Ganbina employees have been with us for a very long time, with very low turnover. Ganbina looks at placing kids in careers they want. It’s not just about giving out jobs. It’s about finding the right jobs. This approach is very different to other job seeker organisations.” – Employer

Ganbina’s expectations of young people and their families motivates them to stay committed and achieve their goals. The team treats each individual with respect and with a strengths-based outlook which allows many of the young people to believe in themselves and work towards their goals.

Ganbina also regularly celebrates Aboriginal and Torres Strait Islander achievement with the Youth Achievement Awards. By modelling this behaviour, they inspire not only their young people but also others in the community to dream big and do more.

“Ganbina helped him get a tax file, find employment, uniforms etc. They were also a mentor outside of the school context. They would check in and see if he had any issues with work or school.” – Parent/guardian

Ganbina provides opportunities for young people to learn about their Aboriginal and Torres Strait Islander culture and heritage as part of their education and employment activities. Many young people feel an increased sense of belonging and self from being a part of Ganbina and learning about their history, as well as the history of other Aboriginal and Torres Strait Islander Peoples.

We found that increased cultural knowledge and pride was an outcome experienced by all young people surveyed and interviewed. Ganbina’s young people are encouraged to walk confidently in both the professional world and their cultural world. This is profound given we live in a society where most Aboriginal and Torres Strait Islander Peoples and people of colour may not feel mainstream Australia accepts their true and whole self.

Ganbina is working to dismantle long-term pervasive issues and has been able to prove its effectiveness time and time again.