The coronavirus pandemic presents an unlikely opportunity for some Aboriginal people seeking sanctuary on their traditional country.

This is the third in our 3-part series sharing stories from SVA clients, partners and friends in remote Aboriginal and Torres Strait Islander communities, where people are uniquely affected by the coronavirus crisis. Part 1 of the series describes how Indigenous broadcasting services are responding to the coronavirus crisis. Part 2 investigates how the competing considerations of safety, service provision and a mining economy are being managed in a remote NT community.

Across the country, Australians are being advised – or ordered – to stay at home if they can.

In very remote parts of Australia, some Aboriginal people have been faced with a choice about where to base themselves during the pandemic lock down: whether in central towns with established medical services, or in very remote communities, homelands and outstations, with their families.

Martu are the traditional custodians of a vast area of the East Pilbara, in Western Australia. Against the coronavirus threat, many Martu living in the towns of Newman and Port Hedland have opted to return to the safety of their desert communities. A reversal of the last 10 year trend, it presents an opportunity to support Martu to remain on their country beyond the current crisis to the benefit of Martu but also government.

Martu and their country 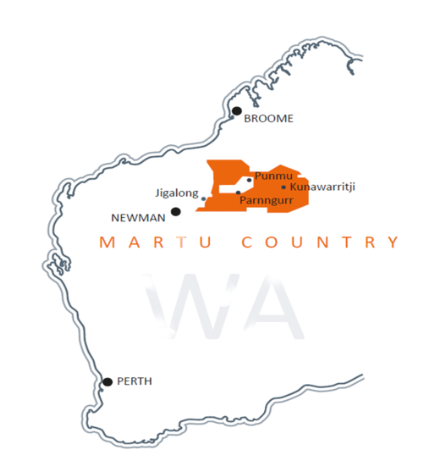 Martu have immense pride in their desert communities. The communities of Parnngurr, Punmu and Kunawarritji were established in the homelands movement of the 1980s. Jigalong, a former mission site, was handed back to Martu in 1969.

These communities are where Martu want to live, where their old people are buried, and where their children can grow up safely and learn about their country.

But over the last 10 years, the desert communities haven’t been able to accommodate natural population growth, as a result of a lack of investment in housing and services. Many Martu have left for the towns of Newman and Port Hedland. In moving from alcohol-free communities into town, Martu have struggled to integrate a traditional life with a modern ‘whitefella’ existence.

In the desert communities, Martu have respite from the dysfunction of town. These communities offer Martu the opportunity to live close to their traditional lands in a society which is still predominantly Martu. Crime is much lower. And they can fulfil their deep cultural obligations to look after their country within an environment they can shape.

Desert communities as a refuge from coronavirus

In early March this year, the police and other local organisations gave Martu in Newman and Port Hedland information about coronavirus, and explained the opportunity to return to their desert communities.

Overwhelmingly, Martu chose to return. Martu organisation, Kanyirninpa Jukurrpa (KJ) estimates that the Martu population in Newman has dropped from around 300 to 100 in a matter of weeks. And the desert communities are full again.

“Initially, it was people in town who would normally reside in the communities, they went back home,” says Tristan Cole, General Manager at KJ. “Then, families began to call others to leave town. Those people are camping with family now.”

KJ was part of an informal group of local service providers that mobilised quickly in response to the virus. Alongside KJ were other Aboriginal corporations – Puntukurnu Aboriginal Medical Service, and the Western Desert Lands Aboriginal Corporation – as well as the East Pilbara Shire Council, the Newman police, the Department of Communities, and BHP.

Cole says the fast response showed the importance of local leadership in the Pilbara. “Everyone knew the local environment, and we were a little bit ahead of the curve,” he says. This meant that the work of informing Martu and organising transport to communities could begin without formal support from government.

Pragmatic decisions, grounded in local knowledge, will remain crucial in the coming months.

The government established a Designated Biosecurity Area on 26 March, which imposes a 14 day quarantine requirement for entry into Martu communities. Given the high risk the virus would pose to communities, the lockdown may last for several months.

But if biosecurity restrictions succeed in keeping the desert communities virus-free, Martu will be in a different position to other parts of Australia. “If remote communities are demonstrably free of the virus, it will be important for social cohesion to allow a range of activities to resume quickly,” says Peter Johnson, a KJ Advisory Director, who co-founded the organisation in 2005.

KJ is keen to deliver its social, cultural and on-country programs – which drive wellbeing and provide employment for Martu in areas such as land management, early childhood development, justice diversion and cultural learning.

The return of Martu to their desert communities presents an opportunity

Having large numbers of Martu return to the desert communities creates an opportunity to reengage them in activities on country, and for Martu to teach and learn the knowledge and practices of their old people.

Importantly, this situation is also likely to result in a measurable reduction in antisocial behaviour.

In 2018, SVA Consulting worked with KJ to understand the impacts of investment, or lack of investment, in remote communities. The cost benefit analysis revealed a clear picture: that outcomes for Martu are much worse, and costs to government much higher – when Martu are living in the larger towns, compared to their desert communities.

The picture was clearest in the area of criminal justice. In the town of Newman, 90% of police call-outs involved Martu people. Data collected by the Newman Women’s Shelter found that there were 89 Martu in prison, more than half of whom were Newman residents. This represented 17% of the adult Martu population ordinarily resident in Newman.

KJ intends to work with Newman police over the coming months to collect data on police call outs and offences, to give further support to the case that outcomes for Martu are likely to be far better if they can live in the desert communities.

The challenge is that these communities – now with more residents than ever – have a legacy of poor investment, especially in housing. The cracks are starting to show, says Johnson. “The substandard houses are disintegrating and this is exacerbated with overcrowding. There has still been no action on expansion or maintenance of housing in the  remote communities, and that lack of investment is really catching up.”

The biosecurity lockdown has also highlighted the need to support Martu to perform basic transactions in communities, rather than go into town. Given the dysfunction in Newman and Port Hedland, there is a strong case to enable Martu to engage remotely with Centrelink, banks, courts and correctional services.

“There’s some stuff that people have to go to town for that’s just ridiculous,” says Cole. “Like signing forms, or court appearances. You can do your court appearances in jail by videolink. Why can’t you do it from community?”

The communities are connected to the NBN. There is a need, however, for dedicated terminals – staffed by community coordinators – to facilitate these transactions. This is something that KJ is now lobbying the Western Australian Government to support.

The 2018 cost benefit analysis showed that even modest investment in the remote communities – such as new housing, and support for justice diversion programs – would generate significant cost savings for government. The benefits were estimated at more than $57 million over a 10-year period. By moving quickly in the current context, governments could potentially exceed these benefits by supporting large numbers of Martu to stay, beyond the lockdown.

Dawn Oats, a Martu woman, summarised the difference between town and country as part of our cost benefit analysis. “You can see the people who are on-country, doing something for themselves,” she told us. “They good. They feel at home. But when they’re in town, it’s like they’re somewhere else.”

“The longer-term vision for Martu is sustainable remote communities,” says Cole. “They want to live on country. They want the connection. You’ll see some people come back to town [after the restrictions are lifted], but if there is an effort put into infrastructure, the economy, and how services are delivered, I think you would see a lot more people staying in communities.”

Find out more about the cost benefit analysis project we did with KJ.