September saw over 170 school leaders and students from the SVA Bright Spots Schools Connection descend on Canberra for two days of STEM focused discussion and activities at the 16th Thought Leadership Gathering. Logan Skilling and Brianna Dewar, year 10 students from Wirreanda Secondary School in South Australia, were among the 53 students who took part in the event, accompanied by their principal, Caroline Fishpool, their deputy principal Rhoni McFarlane and senior leader Nick Jackson. Far from being passive observers, Breanna and Logan facilitated sessions, advised on a STEM panel, conducted STEM experiments and were even interviewed by national media. Here they share their reflections on their Canberra experience:

During our time at the SVA Thought Leadership Gathering we heard many interesting ideas and thoughts from leaders and learners from many different schools and backgrounds.

On the first day a lot of time was dedicated to listening to experts in the field of STEM, Tom Lowrie and Simon Leonard. Both of them had a different way of looking at STEM and education, but something both speeches had in common was that STEM is crucial to the leaders and learners of the future.

During the Design Thinking workshop that we ran, we encountered a lot of unique perspectives on learning and STEM and had a fun time whilst showing people a different way of thinking and working through problems. We believe that design thinking and STEM go hand in hand, both are essential for solving problems of the future and adapting to the changing times.

When we went to Parliament house later in the afternoon, we were able to see what was going on with the Senate. It was interesting and also funny to hear the “debate” that was going on between Senator Hanson and Senator Hanson Young. When we were leaving the Senate Senator Kakoschke-Moore waved to Brianna as they are family friends. Afterwards when we went to the Innovation in STEM Networking Event, Senator Penny Wong was there and Brianna was fortunate enough to shake her hand and say hello. Brianna was also invited on to a panel with four other students from different schools. Brianna did extremely well on the panel.

During the second day, we were quickly shuffled off into a bus and off to Questacon. There was not much talking at the start of the day, just a five minute hello and what we were doing for the day, then half of the people there were sent off to Questacon. Questacon was extremely fun. We had to  first go around and write what a certain object can do, what it feels like, smells like and would taste like on a piece of paper that was with the item. Items that our school looked at were things like; wooden skewers, foam packing peanuts, fly screen, paper clips and a cardboard with a design on it.

After that we went off Individually and had to make small “prototypes” of items with what we could find on the tables all around the room. Everyone in Questacon enjoyed doing this, everyone was smiling and having fun even though they were confused. We then had to form back into our groups and design a “Shake Table”. Logan’s design was the one we went with, it was just a piece of cardboard with rubber bands going through holes in the corners and we would just shake it. We then had to design a 30cm tall tower with a 100g weight in the centre, Brianna and Ms. McFarlane thought of the design. During our time there Brianna was interviewed by 9 News Canberra. 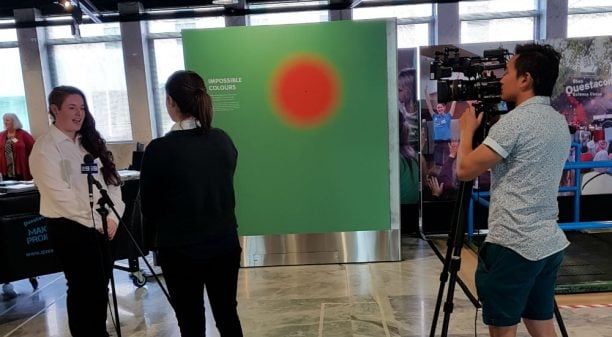 After Questacon we went back to the University of Canberra where the second activities were being hosted. Brianna and Mr. Jackson went and did an activity with the CSIRO, whilst Ms. McFarlane, Ms. Fishpool and Logan did an activity with virtual reality (VR), augmented reality (AR) and there was some on Mixed Reality. The VR was extremely fun, we learnt about how VR can be used in a school setting which I am sure was more interesting for the teachers but it was still good to hear that something as fun as VR could be in our classes. The CSIRO workshop was great, we split into groups and worked together to address and come up with some sort of solution to a problem. Each group’s ideas were unique and interesting. It was a great experience and we got a lot of fun ideas and great information about the CSIRO from it.

Overall, the experience of attending the SVA Thought Leadership Gathering in Canberra was one to remember. It was a lot of fun while also extremely interesting and we are both so thankful for the opportunity.