Over the past year Social Ventures Australia has been working with Google to help deliver the 2016-17 Google Impact Challenge program. Recently SVA’s Kye White caught up with Eric Brace from The Australian Literacy and Numeracy Foundation, one of the participating organisations, to chat about the work they do to preserve First Australian languages.

For years, First Australians have been working hard to preserve their languages.

It’s important work. These languages are a precious resource and key to Indigenous wellbeing. First languages give people a way to connect with the world through their own culture. They provide individuals with a sense of belonging to people and places and are a core part of one’s identity.

Before recent advancements in technology, print resources were one of only a few tools available to help preserve and disseminate many of these languages. However, such resources are restricted by their format. They are irregularly produced, easily lost, and often inaccessible.

Now, thanks to The Australian Literacy and Numeracy Foundation (ALNF), communities throughout Australia will be able to use a new digital platform, which the organisation hopes will help strengthen access to language and literacy resources in Indigenous languages in Australia. ALNF has created a digital platform, which can be used by communities to capture and interact with the spoken and written word. This was made possible through the support of the Google Impact Challenge 2016, which Social Ventures Australia helped deliver.

Language knowledge, including definitions, pronunciation, phonetic patterns, sentence examples and more, can be used as interactive teaching materials for children, community members and anyone who wants to develop language and literacy skills in a local Indigenous language, or even one far from home.

ALNF Programs Director, Eric Brace, says the tool’s development is the realisation of a long-held goal of the organisation.

Brace has been working with ALNF since 2004 and is all too familiar with the limited resources communities have to draw upon to help them preserve their languages. This tool will help them to teach their children in a way that supports reading, writing, speaking and listening in their mother tongue or heritage language.

“The resources, which we’ve traditionally relied upon, they’re quite impressive books, but their ability to truly capture the nuances of the spoken language is often limited,” he says. “They don’t speak to you, they can’t be easily updated, and sometimes they can be hard to find.”

“What we’re trying to do is use technology to provide a way in which communities can capture the knowledge of elders, and develop a literacy learning platform for children and the broader community.”

The proliferation of smartphones has made creating such a digital tool not only possible, but practical. The tool will be accessible with any smartphone, tablet or desktop computer. ALNF is working hard to refine the user experience and the platform’s stability before it plans to make the platform widely available.

The challenge of scale

While it is difficult to know exactly how many Indigenous languages there are in Australia, according to the National Indigenous Languages Survey (2005), there were about 250 at the time Australia was colonised.

The number of languages presented ALNF with a significant problem – how to develop a tool that can scale?

“That was our main premise in the Google Impact Challenge,” Brace explains.

“If we just invested in a handful of languages, we would never be able to address the major issue: that these languages all need to be supported on an equitable basis”.

“Our main goal is to build a tool that communities can use, whether it’s to preserve the legacy of a grandmother, an uncle, a respected elder, or an entire community.  It can capture that knowledge, and then make it accessible to those who want to explore and learn with interactive and expandable language, literacy and learning resources.” 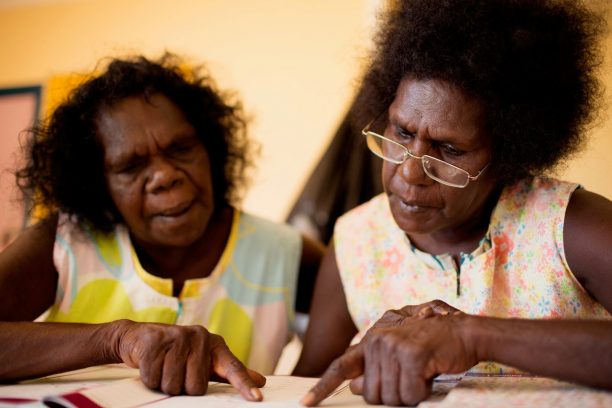 Strengthening knowledge of these languages can also have significant educational benefits. Evidence demonstrates that children who have a solid understanding of their mother tongue language have an easier time learning a second language like English. Brace and the ALNF team have witnessed this first-hand through their work in remote Australia.

“So the fact that you’re conscious of something like phonemic awareness in Pitjantjatjara, when you’re exploring that concept in English, it’s easier to grasp”.

With ALNF’s involvement in the Google Impact Challenge coming to an end, the organisation will now work towards rolling out pilot programs with a number of communities throughout 2018.

“We’re creating a platform that’s not just an archive, but a resource. A language and literacy resource,” Brace says.

If your community is interested in working with ALNF, or you’re interested in supporting its work, please reach out to foundation@alnf.org.