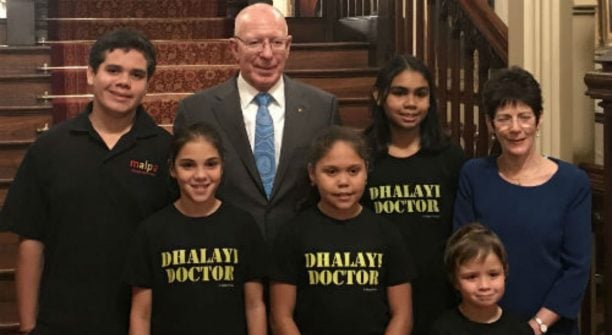 “This year is an important year in our nation,” he told the crowd.

“As we progress on the path of Reconciliation, we are reminded that disadvantage disproportionately affects our First Australians who increasingly fare much worse than non-Indigenous Australians on all key indicators of wellbeing.

“It represents an economic and moral challenge for our country.

“It also illustrates the need for our shared work and your generous support, to safeguard the futures of those in our community who are vulnerable or having a tough time.”

Koczkar was joined at Government House by representatives from SVA venture partner Malpa, including CEO Don Palmer, and a group of Malpa’s Young Doctors.

Malpa works with Elders, community leaders, parents and educators to give children the knowledge and experience to become health ambassadors within their communities.

SVA’s venture philanthropy team is partnering with Malpa to broaden its impact within communities, strengthen its evidence base, and sustainably scale across Australia.

Of course, none of this would be possible, without the network of supporters SVA has built up in the 15 years since it was founded.

“By meeting and chatting with the representatives of Malpa present, we can all hear how we can continue to work together to transform our communities,” Koczkar says.

“Our work wouldn’t be possible without great contributions and sponsorship.

“We celebrate your support and the role you play in our shared achievements over a 15-year long journey of community building.”