A rare opportunity for immersion

In November 2009, members of the SVA Indigenous Investor Circle and supporters witnessed the valuable work SVA venture partner, Ganbina is undertaking in the Indigenous community in Shepparton Victoria.

When SVA invited members of the Indigenous Investor Circle to Shepparton, Victoria to see first-hand the work that Ganbina is doing to support young indigenous students to stay at school, Rob and I immediately accepted. We had both met Ganbina CEO Adrian Appo previously and listened to him talk passionately and compellingly about his programs and his people—but a site visit we knew would be an opportunity to better understand what it is about the Ganbina model that is succeeding in transforming the lives of disadvantaged indigenous youth. Adrian himself was a drawcard for us— inspirational, a confident leader, a gentle and caring man. 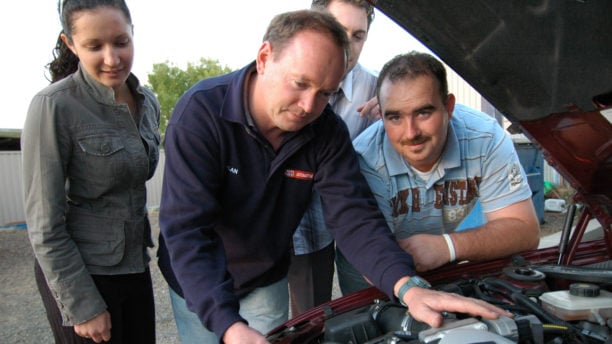 Our ‘immersion’ in Ganbina began with Adrian joining us on the mini-bus an hour out of Shepparton. He framed the Ganbina programs for us very well and the questions began to flow long before we arrived for our moving welcome to country ceremony held by two Indigenous leaders, Kelly and Chris. We were all quite surprised to hear that the Yorta Yorta Nation is one of the largest aboriginal communities in Australia, numbering about 5000.

Lunch with Adrian and members of his staff and Board highlighted their work and the challenges for Ganbina, and the conversations continued informally when a dramatic cloudburst and blocked drain brought a small lake of water under our lunch table. Afternoon tea was held in the Ganbina offices where we heard from three wonderful Ganbina Youth Leaders. They all spoke of their trips to capital cities to meet mainstream leaders, for each of them their first trip on an airplane. When asked who in their lives they felt was a true leader, one young man answered immediately that it was his father, a truck driver who worked so hard and such long hours to provide for his family. His heart was bursting with love for this man. As a parent, all I could think of was I wished so much his Dad could be there.

Rob and I began to see important layers within the programs that we hadn’t understood before the site visit. The Driver Skills Program, for example, is to help students with the hidden costs of getting a licence but less obvious is that it helps to address the issue of unlicensed driving which invariably leads to legal issues, fines and charges. Non-indigenous community members are also involved as volunteers, helping the students complete the required driving hours and sometimes attending the practical testing with them. Getting a licence in this area is critical to employment because of poor public transport.

Well over 200 students, their families and teachers attended the Achievement Award Dinner that evening, and we felt like very special guests. It was a privilege to experience the celebration of so many young Indigenous students, see their excitement and the pride of their families. Most moving of all was hearing what each student hoped to do in the future—in almost every case a university or TAFE qualification. Our hearts went out to the young Year 7 boy who has scored 100% on his final maths exam this year and As and A+s in all of his other subjects: His goal was to become an electrician, a very worthy profession but when he finishes high school he will we hope realize there is a whole world of other opportunities for him to choose from as well.

Site visits to SVA’s venture partners such as Ganbina adds another very rich layer of understanding both the vision of the organisation and the complexities on the ground as well as the transformation that can take place in the lives of people. In the case of Ganbina, it is hard to imagine the programs without the guiding hand of Adrian Appo and his vision.