SVA analysis shows that action is needed to ensure a thriving charities sector which can support Australia through this crisis as well as the ensuing economic recovery – to build back towards an Australia where all people and communities thrive.

Charities will be crucial for Australia’s economic recovery, but they are being hit hard by the Covid-19 economic and health crises. Modelling of the pandemic’s impact on charities’ financial health reveals an imminent risk of substantial numbers of charities becoming unviable with subsequent losses in jobs and services. Without additional support, we could see up to one in six charities fail within six months, with the loss of more than 200,000 jobs.

In June 2020, Social Ventures Australia (SVA) and the Centre for Social Impact (CSI) produced a report that models the potential impact of Covid-19 on the financial health of Australia’s 16,000 registered charities who employ people, to better understand the effects and identify systemic solutions.

There has been great concern about the future of the sector, and the people it supports, given the economic, health and social crises currently unfolding. It will be some time yet before there is sufficient data to be able determine its full impact. However, decisions made now will strongly affect whether charities are Covid-19 casualties or partners in recovery, and those decisions need to be based on the best available information. SVA and CSI undertook this work to support the discussion as the sector seeks to transform in response to Covid-19.

Read the full report, Will Australian charities be Covid-19 casualties or partners in recovery? A financial health check, here.

Charities are critical for Australia’s wellbeing

Charities are critical to Australia’s society and economy. Collectively, they have an annual revenue of $155 billion, which accounts for over 8% of Australia’s GDP.1 One in 10 employees in Australia work in this sector – over 1.3 million people. They also engage over three million volunteers, providing over $12.7 billion in unpaid labour.2 Charities provide services that people, communities and government rely on. They deliver vital services on behalf of Commonwealth and State governments and taxpayers, from disability services to early learning. We all benefit from their contributions to education, health care, sports and recreation, aged care, religion, arts and culture, animal protection, and environmental protection. As a community, we are especially reliant on charities during a crisis and to support a recovery, whether confronted by bushfires or financial turmoil. They are the social glue in our communities, and without them Australia’s quality of life would be poorer on almost every dimension.

Ensuring we have thriving charities will be critical to future productivity and wellbeing in Australia. But right now, when they are needed most, many charities are struggling. The Covid-19 crisis has shaken the charities sector and the livelihood of many beneficiaries, clients, employees and volunteers. Charities are managing the confluence of service disruption, falling income, rising demand and higher costs.

These trends are proving challenging for many organisations of all kinds across Australia. But charities face a particular bind. They are used to lean times and working efficiently, but don’t have the resources to transform as we need them to in this new environment. Most charities balance their books every year, but they have little in reserve to fall back on because of the many constraints and rising costs specific to their operational, regulatory and cultural environment.3 While their income had risen in 2018 (the last year for which we have data) their margins were falling significantly.4 Many are now experiencing an increase in demand at the same time as a drop in income – whereas a for-profit business would expect an increase in their income to accompany an increase in demand. Their flexibility is already restricted by the conditions on many of their funding streams. Government grant processes which prioritise low prices over sector viability can erode margins further. Community and funder expectations that funding goes to direct service delivery mean charities are often unable to invest in organisational capacity necessary for a resilient response if their own organisation is in crisis. Unlike for-profit companies, charities can’t easily raise capital by taking on debt or issuing shares, so are more exposed in unexpected downturns.

To better understand the effects of Covid-19 on the financial viability of charities and identify systemic solutions, we modelled the potential impact of the crisis on the financial health of registered charities in Australia with employees (many are run purely by volunteers). These 16,022 charities employ 1.22 million people or around 94% of the charity workforce.

We modelled a 20% fall in revenue for these charities and found that 88% of them would immediately be operating at a loss, compared to only 35% pre-crisis (see Figure 1.) Seventeen per cent would be at high risk of closing their doors within six months, even when taking their reserves into account. Obviously, this would reduce the ability of charities to provide the services and supports that Australians depend on.

The Commonwealth Government’s wage subsidy program, JobKeeper, is currently helping to sustain the sector. We modelled the effect of JobKeeper on our cohort of charities. The impact is dramatic, although findings are still concerning; 53% of charities would be making an operating loss in this scenario, compared with 88% without JobKeeper. Almost one in 10 (9%) would be at high risk of becoming unviable compared to 17% without JobKeeper. That is, 9% would have an operating deficit based on their income and expenses, and insufficient net current assets to cover six months of deficits.

Figure 2 shows the impact that the crisis and JobKeeper is having on charity viability over time. Six months after the crisis, over 1,200 charities who would otherwise have been at high risk have potentially had their viability maintained by JobKeeper (the difference between the blue and green lines). But because JobKeeper is currently scheduled to end six months after the crisis, we would see an increasing number of charities become unviable in the subsequent 12 months (the difference between the black and green lines).

The charities in our analysis employ over 1.2 million people, almost 10% of the Australian workforce. Compared to the workforce as a whole, they are disproportionately female, work part-time or casually, and are lower paid.5

As is to be expected, JobKeeper potentially reduces the proportion of people working in organisations at high risk – down to 10%. But only 37% of employees are in organisations that are in operating surplus.

In the event of a 20% income drop, and in the absence of straightforward access to new capital through liquidation or leverage of assets, we would expect to see two effects. Some organisations would become financially unviable and their employees would lose their jobs. Alternatively, some charities may attempt to reduce expenditure to match their reduced income. The charities in this analysis, similar to all other charities in the sector, spend more than half of their expenses on employment, so they would likely need to cut staff to achieve this kind of reduction. In practice, we would expect to see a combination of both. Either way, well over 200,000 people could lose their jobs as a result. The economic consequences of job losses on this scale would be dramatic, especially in an ongoing recession.

Even if the health crisis recedes in coming months, and judging by recent events in Victoria there are still some challenges ahead, the Australian economy will take a long time to return to its previous position.6 For Australia to thrive, charities will need to grow, not shrink, in the recovery phase. Stronger charities will be well positioned to provide the services needed to support the community, accelerating our collective recovery. Weakened charities, forced to cut jobs and services will compound the collective challenges we face. Governments, philanthropists and charities need to work in partnership to ensure that our charities emerge stronger.

JobKeeper is helping to sustain the sector for now, but for many organisations it is only delaying the financial reckoning and consequent job losses. The coming ‘October cliff’ of:

will place many charities at risk. At the same time, the economic climate will increase vulnerability across communities and the demand for the services and supports charities provide.

Many charities are drawing on impressive innovation and creativity to transform themselves in the face of changed circumstances. But with their limited reserves, we cannot expect them to do this alone, or to do it indefinitely. They need stronger funding models that will allow them to sustainably deliver on their purpose, or a significant number of charities will be forced to close their doors. As a society, we cannot afford for charities to be focused inward on their own survival – we need them as a partner in recovery. 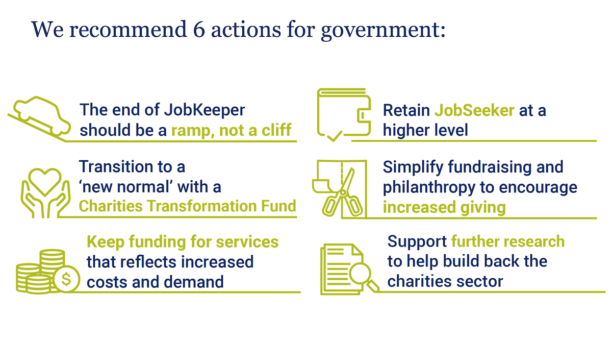 Australia will have stronger charities and stronger communities after Covid-19 if governments:

2  Data is from 2014-5. Deloitte Access Economics (2017), Economic contribution of the Australian charity sector.

5  See YWCA, WomenOnBoards and ACOSS (2012) Reflecting gender diversity: An analysis of gender diversity in the leadership of the community sector: Inaugural survey results; AIGroup (2018) Casual work and part-time work in Australia in 2018; Australian Government (2019), A statistical snapshot of women in the Australian workforce, Department of Education, Skills and Employment. 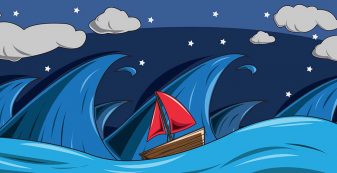 Navigating change in the public and social sectors 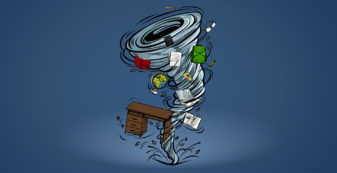 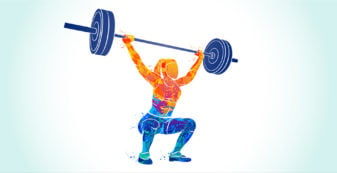 Why economic recovery relies on charities as a strong industry