Founder of micro-credit and Nobel Peace Prize Laureate, Professor Muhammad Yunus urges us to consider social business as a tool to address the world’s increasing inequity, whether it’s getting rural Bangladeshis out of poverty or Australians off welfare.

Economist, social entrepreneur and banker, Professor Muhammad Yunus, who founded the Grameen Bank to provide credit (without collateral) to the extremely poor in Bangladesh, continues to develop social business and the entrepreneurial spirit through the Yunus Centre.

Recently in Australia to speak at the first Australasian Social Business Forum, Yunus gave simple but radical messages about social business, the entrepreneurial nature of human beings, the damage of long term welfare, and how to change the system.

Yunus stressed the need for action to counter the increasing concentration of wealth in the hands of fewer and fewer people.

This direction is not tenable. It’s not acceptable socially. And it’s not politically and economically sustainable.

“Last year, 62 people held as much wealth as the bottom 50 per cent of the world’s population,” said Yunus. “This year, it’s eight who own the equivalent of 50 per cent. What will it be next year? One person?

“This direction is not tenable. It’s not acceptable socially. And it’s not politically and economically sustainable. It is waiting for the big explosion.

“It must change. The question is how.”

Social business is one tool for change

Yunus is at pains to say that social business is not the only way to change the system; however it’s the primary vehicle that he’s employed.

Grameen Bank
Professor Yunus and the Grameen Bank were jointly awarded the Nobel Peace Prize in 2006 for the economic and social development provided by micro-credit. The Bank’s approach was not only radical in that it provided credit without collateral to the extremely poor, it provided that credit to women.
While the Bank’s work was initially based in Bangladesh, it has expanded around the globe including the developed world. In the US, there are 19 branches in 11 cities with eight branches in New York.
The Bank is still very women focused. “Of its 9 million borrowers, 97 per cent are women,” said Yunus.“In the US, all of the 100,000 borrowers are women.”

He defines social business as a cause-driven business in which the investors/owners can gradually recoup the money invested, but cannot take any dividend beyond that point.[1]
Any profit is reinvested in the business itself (or used to start other social businesses). No personal gain is desired by the investors.

“This idea came out of desperation. I wanted to get away from donations to something sustainable. So, every time I had a problem, I would come up with a business solution which meant I got the money back.

“Social business is the name I gave to these types of business.”

“We wanted the maximum social benefit, so we removed completely any idea of making profit for ourselves. We could then be completely free from the logic of profit-making which is very strong and very entrenched.”

Professor Yunus has spent a lifetime providing credit to extremely poor people based on the belief that human beings have enormous creativity and are essentially entrepreneurial; given the right support, they can lift themselves out of poverty.

Human beings are made of unlimited creative power.

“People are born as entrepreneurs. People are not born to work for somebody else,” said Yunus. “If you look at human history: for hundreds of thousands of years we weren’t being paid, we got things done ourselves.

“It’s only in the last two and a half centuries that we’ve had this idea of working for someone else.

“Human beings are made of unlimited creative power. Jobs put a limit to that.

“The creative part of the person is the most important part. You can use your creative powers for others as well, not just yourself.”

Role of a human being: charity and welfare

Clearly, in Australia the situation is very different from Bangladesh and other developing countries where poverty is endemic and there is no formal welfare system.

Yunus spoke to that difference, particularly the nature of welfare.

It is damaging for human beings to stay on welfare for life. You’ll destroy a person.

“It’s very important, it’s our first responsibility, to take care of people in distress,” said Yunus. “The second responsibility is to help people get out of charity; somehow we forgot to say that.

“In the social business solution, our objective would be to make you stand on your own feet and be self-reliant rather than give you a cheque.”

Yunus stressed that welfare should have an expiry date. “Welfare can be a negative thing. It should be time bound.

“It is damaging for human beings to stay on welfare for life. You’ll destroy a person. Their mental faculty will disappear. You are taking away their resilience. And that passes onto the second generation.”

He posed the simple problem to the audience: ‘How do you bring five people off welfare in a way that they are excited about and happy to do?’

“It’s not rocket science; we simply don’t think about it,” he said.

To demonstrate how they are helping young unemployed in Bangladesh, Yunus described the Yunus Centre’s initiative to provide equity financing from social business funds.

“Unemployed young people are invited to submit their business ideas. The fund then chooses the ideas to invest in as a form of social business venture capital. The investment must be returned by the venture,” said Yunus.

Investors partner with the young people and provide additional support in the form of advice, training, and guidance. The process of matching investors with entrepreneurs is replicable through the Design Lab platform

Yunus is extremely positive about the wealth of ideas ready for social business solutions.

It’s me who gets to choose; not what the market wants.

“In social business, you can invest in businesses with returns of less than 10 per cent as no-one else will invest in them. So, there are many opportunities and a pool of willing capital,” said Yunus.

Yunus was at his most feisty when debating the availability of capital for low or no interest social business investment.

“I contest that there’s a limitation on that money. If eight people have the equivalent of 50 per cent of the population, where’s the limitation?” he said.

“Ultimately it’s me as a person. What do I want? Do I want another villa or to do something else? How do I want to end my life? It’s me who gets to choose; not what the market wants.”

Making money is happiness. Making other people happy is a super happiness.

He also doesn’t agree with the idea that profit is needed to create the appetite for scale.

“Making money is happiness; that’s the incentive. Making other people happy is a super happiness,” says Yunus. “You choose what happiness you want. Ultimately, it’s up to you what you want. If you do more [social business], more super happiness!”

Yunus provided examples of a number of Grameen social businesses as different models for solving problems. One was Grameen Danone Foods, the yoghurt manufacturer set up to addresses malnutrition in rural areas. The nutrient-rich yoghurt is manufactured as cheaply as possible, then packaged as two different products, explained Yunus.

“One is sold to the supermarkets where rich people shop; the other is sold into rural areas at half the production cost,” said Yunus. “We make money from the one product and cross subside within the same company.”

Yunus sees the education system at fault as it enforces the idea that young people are preparing to work for someone else and that the only business model is a profit-making one.

You can train your mind that you are a job creator, not a job seeker.

“Your life is dedicated to finding a job, and once you’ve found a job the rest of your life is done; you just keep repeating it. In the whole process, you are losing yourself.”

Instead, Yunus says that he educates young people that a job is an old fashioned idea. “You can train your mind that you are a job creator, not a job seeker. We just need to create a financial system to support that.”

Profit-making isn’t the only way to go about solving problems.

Yunus also believes that young people should be introduced to options when it comes to business models.

“Profit-making isn’t the only way to go about solving problems. Adults’ minds are already set; they are fitted with glasses with the dollar signs. Young people are not yet fitted with those glasses.”

Yunus pointed out that while profit-making businesses can solve problems, it’s not their objective. “Sometimes it comes as a by-product on the way,” he said.

Yunus contrasted this with social businesses which are designed to solve a specific problem: whether its agricultural, health, or employment-related.

Imagination is your friend

For Yunus, the creative power of the imagination has the potential to solve our social problems.

“I tell young people, you should think what kind of world you want to build. Make it as utopian as you can get. Imagination is what will drive you; not the reality.

“You are a free person; it doesn’t cost you a penny to build it in your mind. Once you’ve got the destination, now build the road to get there.”

“If you do not define your destination, you won’t get there. That is your first job.

“Imagination is your friend,” he said.

Yunus emphasised that you can start small, and keep learning and prototyping until you have something that works.

Defiance is the way

In his long history of developing micro finance with Grameen Bank, Yunus himself came up against enormous resistance. However, it’s something that he sees as an essential test for whether you are making a difference.

“My colleagues would get upset.” he said. “But I would say: if no one is resisting then maybe we’re not doing the right thing. It means it’s hurting them. When you do something new, there is mistrust.”

He recognises that entrepreneurs need to have a good measure of defiance to forge a different path.

“I keep telling young people, defy; don’t accept. You find your way. The only way you can do that is through defiance. If you think you’re right pursue it.

“By accepting norms, you are following the same path. If you want to go to a different destination, you need a different path. That’s what the human life is all about.”

Professor Muhammad Yunus visited Australia in April 2017 as keynote speaker at the first Australasian Social Business Forum which SVA supported. He also spoke at a breakfast hosted by the Private Wealth Network. This article is based on what Professor Yunus said at those events. 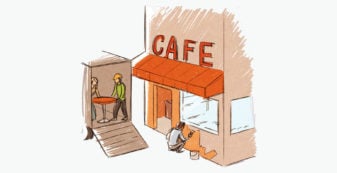 Social enterprise: how to pick a winner

Social procurement success: what it takes 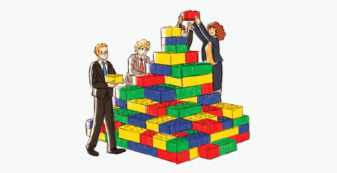 Goodstart: a story of impact investing