Mimi’s House is an early intervention program that supports primary school aged children at risk of falling out of the school system in the Moreton Bay region.

Mimi’s House is a program within Hope Centre Services (HCS). It provides a child centred, early intervention support service for at risk children five to 10 years old from Indigenous, Pacific Islander and other low socio-economic background children, who are finding it difficult to develop emotionally, socially and academically at school.

Year 12 attainment in Deception Bay is lower than the rest of Queensland at 33% compared to 80%, with youth unemployment at the very high rate of 17.6%. Up to 5% of children in Queensland schools are categorised as red zone, meaning they are highly vulnerable and at risk children of falling through the school system.*

To build strength, hope and resilience into the lives of children experiencing severe disadvantage, with equal opportunity to access high quality education and to develop the skills to participate fully in society, regardless of background. This venture aims to break the cycle of welfare dependency in the Moreton Bay region.

SVA is supporting Mimi’s House to refine and embed the Mimi’s House model, replicate the program and build an evidence base that supports wider adoption. 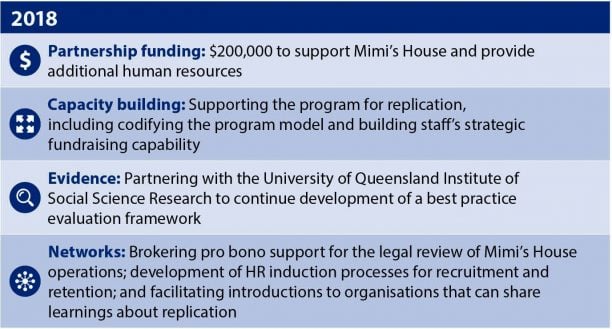 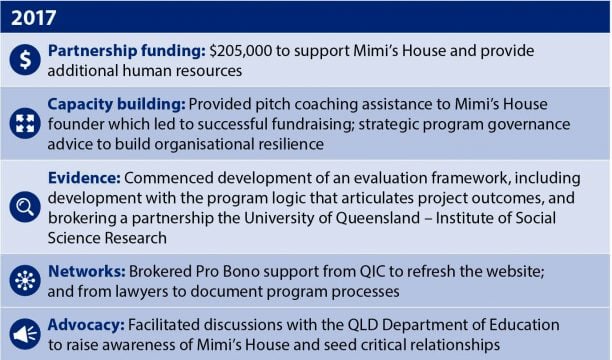 Noah was eight when he started his first year at Mimi’s House. He was referred by his school, who had grave concerns about his disengagement from learning, behaviour issues, and mental health.

At first, Noah’s behaviour while at Mimi’s house was explosively reactive and guarded. On physical contact he would scream ‘Don’t touch me!’

Over the course of the year Noah gradually came to trust the Mimi’s House team, and enjoy himself while there.

He loves to cook and play Minute To Win It. ‘They listen and we get to do things, different things, and it’s fun!’ he says. ‘Everyone gets a turn, everyone is involved. It’s calm.’

Noah’s mum says he didn’t have a positive male role model in his life until Mimi’s House. ‘The only one who has stopped to listen to him is a worker there,’ his mum says. ‘Now Noah can’t stop talking about him.’

His school has also reported positive changes. Noah now seeks help from his teachers, is more inclined to start set tasks, and his learning has improved.

‘It’s so good to know that there’s someone else out there who knows my son like I do,’ Noah’s mum says.