STREAT aims to stop youth homelessness and disadvantage, one mouthful at a time.

STREAT is a social enterprise helping homeless youth to have a stable self, stable job and stable home. Through its six hospitality businesses in Melbourne STREAT provides young people with supported pathways to employment – including assistance finding stable housing, vocational skills, improved mental health and well-being.

Over an eight year partnership SVA worked with STREAT to prove, improve and scale its operations to reach more young people and become increasingly financially sustainable. SVA and STREAT will continue to advocate for systems change through sharing insights from the STREAT model to advocating for employment services reform.

‘Our partnership with SVA has been absolutely critical to our growth and success … SVA has provided us with an extraordinary level of business skills, critical thinking and support that was always perfectly targeted to our stage of evolution.’ 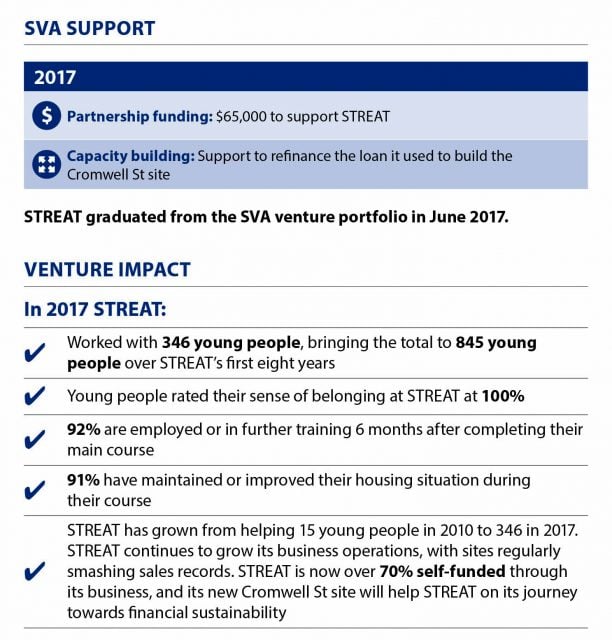 When Zoe arrived at STREAT as a 16-year-old, she was struggling.

Her life at home was troubled, and she desperately wanted to find work so that she could move out of home and live independently.

She’d completed year eight at a Steiner School, but after transitioning to a mainstream school in year nine, she hit a wall. A breakdown meant she was unable to complete her education.

Determined not to give up, Zoe looked for other options. She loved to bake, and when she learned about STREAT she signed up for its Entrée program. She decided to do work experience at STREAT’s brand new artisan bakery.

As she began to bake, Zoe who at first was quiet, shy and withdrawn, began to open up.

The STREAT team got to know an intelligent and deeply sensitive young woman, full of ambition. At the same time they began to learn just how difficult Zoe’s life was. She had been caring for a parent who was struggling under the weight of a serious drug addiction.

Zoe opted to continue with STREAT, accepting a place in its intensive Main Course training program, where she excelled. This was despite a series of fainting spells, which the team discovered were caused by barely eating. Her family had less than $20 a week for groceries.

STREAT was able to feed Zoe and send her home with food on a regular
basis, enabling her to complete her qualifications and the entire twenty-week course.

Thanks to her exceptional effort, STREAT had no problem placing Zoe with Epicure. Zoe has been with Epicure since her graduation in mid-2017 and loves it. Her goal is to become a pastry chef, and to one day open her own patisserie.