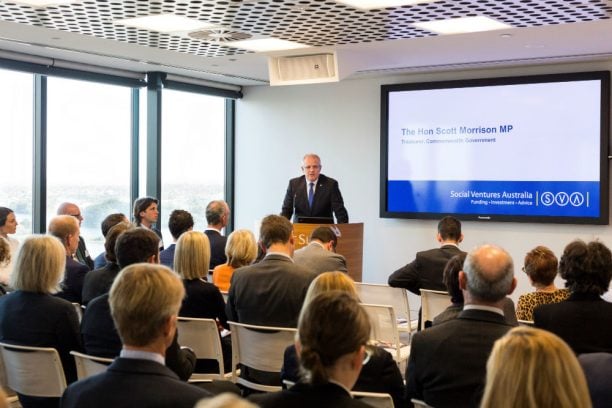 Speaking at the Fund’s launch at Credit Suisse’s Sydney office on Tuesday, Morrison said the Fund arrives at a time when the impact investing model is gaining steam around the world.

“Not only does the roll out of the $15 million fund show confidence in the market, but it is also driving competition by setting a new benchmark on downside protection,” Morrison says.

“And I note the fund will invest in projects that create jobs, homes, and opportunities for disadvantaged Australians.”

The SVA Diversified Impact Fund is the first of its kind in Australia, as it provides 20% downside protection from leading philanthropists including Joseph Skrzynski, Geoff Wilson and their families, and the Bob Bryan Foundation. Social Ventures Australia is seeking to raise between $10 and $15 million for the Fund, with a minimum of $50,000 per project.

Morrison says it was during his time as Minister for Social Services that he first became interested in impact investing, after witnessing the good outcomes it produced, particularly for organisations tackling homelessness.

“I was overwhelmed by the good intentions and good heartedness of the people I worked with while I was social services minister,” he said.

“When I would engage with organisations that are adopting (the impact investing) model, I observed both passion, but also a discipline and vision for their operation that wasn’t limited by government.

“It was only limited by how clever they were, or how they could see their organisations transform by bringing the capital from wherever the they needed to bring it from to achieve their success.”

Earlier this year, the federal government committed $30 million to support Australian impact investing. Morrison recognises the size of this commitment as a “modest amount” but says it sends an important signal about the government’s intention.

“The government needs to take on a further enabling role in the social impact investing market,” Morrison says.

“It’s just starting point. We’re not saying mission accomplished, tick the box, let’s move on to the next issue. We see this as an ongoing role.

“Bringing change to the circumstances of some of the most vulnerable Australians is something worth investing in.”

“The (SVA Diversified Impact Fund) is a critical component of building the capacity of the sector to be able to respond to that opportunity,” Koczkar says.

You can find information on the SVA Diversified Impact Fund here.